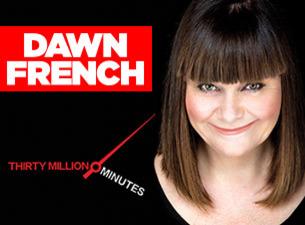 DAWN FRENCH, the award-winning actor, best-selling novelist and all round very funny lady, has written a new show, based on her life and career, called 30 Million Minutes.

30 Million Minutes consists of various delights and riches, with the odd irksome tribulation thrown in, as Dawn takes audiences through the various lessons life has taught her, and the things she knows for sure.

The public are advised to buy tickets – which go on sale on Monday, October 5 at 10am - because Dawn is convinced it won't be long before she is far too doolally to perform it.

The evidence is there for all to see. She is already three quarters certifiably daft. The other quarter is utterly bewildered. And the remaining quarter simply can't do maths. With a sharp eye for comic detail and a wicked ear for the absurdities of life, Dawn French of Cornwall shares how she has misguidedly spent her whole life vigorously attempting to be a fully functioning female human.

Her extraordinary lack of willpower, combined with an enviable knack for nosey parking and showing off, has driven her to grapple with the big stuff of life in public. 30 million minutes of life in fact. That's how long she's been alive.

It's also worth coming if only to finally witness what size she actually is. Can we believe the stolen images of so many women's magazines? What is the truth? Is she so unfeasibly large that she can hardly live? Or does she sleep in a matchbox? Marvel at how one woman can mercilessly murder so much chocolate, and yet remain so curiously slim…

As a big fat liar once said of her: "Her singular attempt to be ordinary fails miserably."

Dawn says; "I'm sick with excitement about this solo tour. I am enjoying the fact that I can't categorise exactly what it is, but it's somewhere between a monologue, a play, and an autobiographical slide show with a few funnies thrown in. At last, I have had one of my three genie wishes granted, which is to work with Michael Grandage. The other two wishes are as yet unfulfilled. They are secret obviously, but suffice to say, one is about Barack Obama in Speedos. The other is about me in speedos, with cheesecake involved... Enough said."

The immense comedic talent of Ms French has long enthralled New Zealand audiences.  Her work with long-time friend and colleague Jennifer Saunders found a keen audience in this country, and Dawn’s TV series ‘Vicar of Dibley’ was a long-running success.  Most recently she was a judge on ‘Australia’s Got Talent’, fuelling a desire to return ‘down under’ to share her personal journey in this acclaimed solo show.

UK press reviews of 30 Million Minutes have been glowing:

The critics are raving about 30 Million Minutes” The Independent

A STRICT LOCKOUT PERIOD APPLIES: Latecomers will not be admitted until the interval.