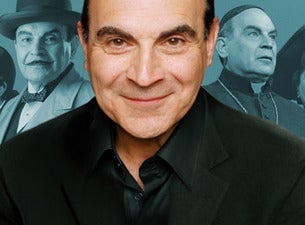 FOR THE FIRST TIME EVER IN NEW ZEALAND

David Suchet will be making his New Zealand stage debut in POIROT AND MORE: A RETROSPECTIVE in early 2020. The tour will travel through the country in February allowing audiences in Wellington and Auckland to experience this rare opportunity with one of the world’s most celebrated and fascinating actors of our time.

For over 25 years David Suchet captivated millions worldwide as Agatha Christie’s elegant Belgian detective Hercule Poirot. Beyond Poirot, this Emmy winning actor, also nominated for multiple Olivier Awards, BAFTAs and a Tony Award, has been celebrated for his portrayal of iconic roles such as Lady Bracknell, Cardinal Benelli and Freud. David has also graced the world’s stages bringing literary greats to life, including Shakespeare, Wilde and Albee.

“Coming to New Zealand has always been an ambition and I am so delighted I now have the chance to visit but also to be performing on stage there for the very first time. I very much look forward to spending the summer in that part of the world on my Australia and New Zealand tour”, said David Suchet.

This unique live stage show will highlight the actor behind the detective and the many faces he’s portrayed on stage and screen over a career spanning five decades. Audiences will discover why David Suchet is renowned for not only becoming the role, but also taking on the personalities of some of television, film and theatre’s most fascinating characters.

The multi-award winner starred in all 74 Poirot television movies over 25 years taking him into the lounge room of millions around the world. His television credits extend over 40 years and include some of Britain’s most esteemed programs from The Life of Freud, The Way We Live Now, Great Expectations and more recently Dr Who and Press. David has also starred in numerous international films including Harry and the Hendersons, The Bank Job and American Assassin, whilst also maintaining his impressive theatre career. He is an Associate Artist and Governor of the Royal Shakespeare Company having played Lago in Othello, Shylock in The Merchant of Venice, Caliban in The Tempest, Bolingbroke in Richard II and Angelo in Measure for Measure, all having been nominated for Olivier Best Actor Awards. Further theatre credits include Oscar Wilde’s The Importance of Being Ernest, Amadeus, Who’s afraid of Virginia Woolf, The Last Confession and Arthur Miller’s The Price. In 2007 he won an Emmy Award for his role as tycoon Robert Maxwell in the TV movie Maxwell and in 2011 he was made a Commander of the Most Excellent Order of the British Empire (CBE).

Join David Suchet in conversation with the man, the actor and his many roles in an unmistakably unique event. A retrospective look at David’s career will have you witness some of his most beloved performances in a new and intimate light.

POIROT AND MORE: A RETROSPECTIVE comes to New Zealand stages for the very first time in 2020 for a strictly limited engagement.