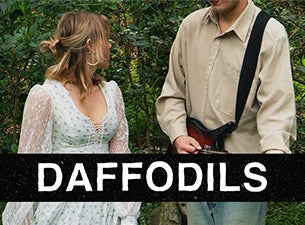 Evident of the band’s escalating success it’s been a big few months for the Auckland four-piece with the October release of their debut EP, followed by sold-out gigs in November and opening for Canadian Orville Peck’s January show.

Now the band are set to embark on headline shows landing at Auckland’s Hollywood Theatre for an all-ages show on Friday April 17, then down to Dunedin for one night at Starters Bar on Friday May 1.

Tickets for both shows will go on sale at midday Monday, February 24.

My Live Nation members can be among the first to access tickets during the pre-sale beginning at midday today.

Daffodils stepped into the spotlight with the release of their 2017 debut single, “Two Angels”.

2018 saw the group release a trio of tracks - among them their fourth single and fan favourite, “A Leo Underwater” - and were signed by the UK’s Kartel Music Group.

In late October 2019 the Auckland quartet delivered their debut EP, Boys, featuring five tracks including “Boys” and “Why Don’t You Hold Me?”.