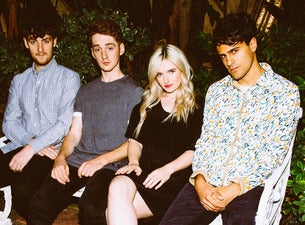 Hot UK newcomers Clean Bandit are stealing the spotlight with their pop-meets-classical dance jams, paving the way for an innovative genre that's all their own. Whether they're performing the smash-hit "Rather Be" or putting a unique spin on Lorde's "Royals," Clean Bandit create a perfect hybrid of strings and synths, always taking the stage in style. Back on the road, the group will treat ticket buyers to hit-filled sets on their highly anticipated tour dates throughout the UK, US, and Europe.

Clean Bandit members Grace Chatto, Milan Neil Amin-Smith, and brothers  Jack and Luke Patterson formed during their undergraduate studies at Cambridge University in 2009, remixing music from their string quartet by adding beats and synths to the raw, classical sound. Since then they've been steadily on the rise, turning heads with No. 1 hit "Rather Be" and generating significant buzz around their 2014 full-length debut New Eyes, which features a variety of soulful guest vocalists. In addition to their infectious tunes, the group has also established a chic visual image, creating eye-catching music videos through their side project Clean Film. Clean Bandit will have ticket buyers dancing out of their seats on a string of entertaining shows, sharing their pop-infused hits alongside artists like London Grammar, SBTRKT, and more in support of their 2014 release New Eyes.