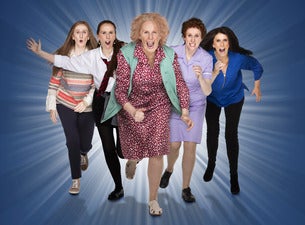 The critically acclaimed, award-winning comedian and actor, CATHERINE TATE, is bringing The Catherine Tate Show - Live to New Zealand for the first time, and we Kiwi’s can’t get enough of the British television star!

With sold out shows in Auckland and Wellington, due to exceptional demand an additional Wellington show at the Opera House has now been added.

My Live Nation members can be among the first to secure tickets during the pre-sale commencing 12pm Tuesday, June 26.

Tickets for all new shows go on sale at 1pm, June 27 For complete tour and ticket and information, visit: livenation.co.nz.

In never before seen sketches, the tour will unite some of Catherine's best-known characters from her hugely successful BBC series 'The Catherine Tate Show', broadcast on TVNZ in New Zealand. The cast will include 'Nan' Taylor, Irish nurse Bernie, Geordie Georgie, Essex girl Sam… and the return of a certain argumentative teenager…

Catherine Tate said: “I cannot wait to start this tour. Live shows are my favourite thing to do and we are going to have a blast in New Zealand. Exciting!”

Joining Catherine on her first ever live tour is long–term collaborator Niky Wardley. Niky will take to the stage alongside Catherine as she reprises some of the many characters she embodied throughout the series. They will be joined by David O’Reilly.