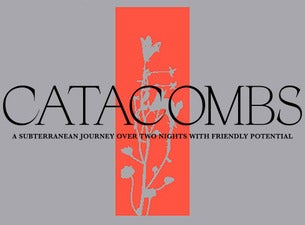 Friendly Potential returns to the majestic Wintergarden hall beneath Auckland’s historic Civic theatre for another two night excursion into the CATACOMBS.

For our second edition, we’re going further underground. This time, we’re celebrating an architect of the underground electronic music scene, alongside other accomplished local and international heroes. Let’s come together at the Wintergarden, a regal subterranean dance-hall that contains one of the richest sounding spaces in the country, to feast on the best that left-field club music has to offer.

Derrick May is electronic music royalty. As one of the Belleville Three he helped to create techno in the early 80s alongside Kevin Saunderson and Juan Atkins. His recordings as Rhythim is Rhythim and Mayday were at the vanguard of this hi-tech soul movement, pushing the bounds of what was thought possible. And through his Transmat label, he introduced the world to legends such as Stacey Pullen, Carl Craig, and Kenny Larkin. Respect the architect.

He is a prolific genre-crossing producer, renowned selector, respected label head, and sought-after graphic designer. With such a formidable schedule, we’re unsure if Luca Lozano sleeps. His productions for labels such as Running Back, Sex Tags, and Optimo harness the innocence and excitement of rave culture in a way that cheap revivalists could only dream of, and his Klasse Wrecks label and imprints gain accolades everywhere you look. Expect Luca to bring things to fever pitch.

Hong Kong native Mr. Ho has amassed a serious reputation in the electronic music world. He runs Klasse Wrecks with Luca Lozano, where he is renowned for discovering fresh eccentric talent and tracking down overlooked pioneers. His energy, enthusiasm, and eclecticism are all over his records for Neubau and ESP Institute and his monthly House of Ho residency in Hong Kong. We can’t wait to welcome him to New Zealand for the first time.

Napoli duo Nu Guinea gained a cult following as soon as they started creating music — and for good reason. Their music, both solo and with afrobeat legend Tony Allen, distil a timeless Mediterranean sound down to its purest elements, and focus it straight on the dancefloor. Now, their records sell out instantly and they’re championed by everyone from Gilles Peterson to Peggy Gou. We’re so excited to finally witness their combination DJ and live keys set in Auckland.

Pjenné is a solid name in the Melbourne dance community, renowned for sets full of heavy rhythms, big basslines, and tightly flowing mixing that make it impossible to leave the floor. Her distinct ability to unite diverse sounds has made her at home in small sweaty clubs, on PBS Radio, and at festivals such as Inner Varnika, Strawberry Fields, and Golden Plains. Pjenné’s pervasive passion for a good dance means that she has quickly becoming a name in demand. See her New Zealand debut at Catacombs.

Roza Terenzi is one of the fastest growing names in dance music. In just two years, she has put out music on a plethora of labels including Kalahari Oyster Cult, Voyage Recordings, Butter Sessions, Salt Mines, Planet Euphorique, Bizarro and the mighty Dekmantel. It sounds wild, and then you realise she has been releasing music since she was nine years old. At Catacombs, Roza Terenzi will showcase her powerful and energetic live set for the first time in NZ. Dress to sweat.

Tornado Wallace is a trailblazing musical mind. His records for Running Back, Animals Dancing, Beats In Space, Delusions of Grandeur, and ESP Institute satiate those hungry for a contemporary Compass Point or a new wave of Italian dream house. This global sensibility also courses through his genre-spanning DJ sets, which he has honed through almost a decade of relentless touring. Come and gorge on greatness.

Vanessa Worm is going to be huge. The Winton-via-Melbourne superstar has put out music on Optimo and Fort Romeau’s Cin Cin already this year, and is soon to release her debut album on Optimo as well. She also co-pilots one of New Zealand’s most promising new labels, Head Rush Enterprises, alongside local dance royalty Eden Burns. Make sure you catch the raw power of her live set at her Auckland debut.

The Civic, and the Wintergarden beneath it, is a fever dream. Located in the heart of Auckland, it was opened in 1929 as the city’s premier picture palace. It is the product of a slightly crazed decade speeding toward inevitable collapse - with a fantastical interior featuring illuminated wild animals, exotic figures, and motifs, all held under a twinkling night sky. But the Civic was not just a cinema. It housed a ballet, an orchestra, and downstairs - the Wintergarden. This dance-hall and restaurant was resplendent - international chefs, a hundred staff, its own house band, and an artistic director fresh from Los Angeles and Sydney. It was ambitious, sensational, and chaotic. And then, ten months later, it was over.

In the early 1940s, the Civic and Wintergarden came alive again. They were a cultural catalyst, as precocious local talent collided with international artistic juggernauts, fuelled by the extravagant spending of American servicemen. There was even a murder scandal. Later, the Rolling Stones played from a golden barge that floated above the Wintergarden.

To us, the Wintergarden represents an ambitious and iconoclastic part of humanity and history that excites us so much. We cannot wait to continue adding to its story.

For more info head to the Friendly Potential Facebook Page: