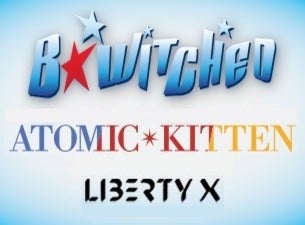 Unfortunately Joanne O'Meara has been struck down with a severe case of food poisoning and has been advised by doctors not to perform on Friday 3 February 2017 and as such S Club 3 will not perform. Liberty X’s start time will be delayed.
________________

Three 90’s icons team up for a live concert Spectacular.

Grab your friends, for a once in a lifetime experience

Guaranteed to be the Best Concert Ever.

Irish 90’s pop sensations B*WITCHED bring with them a string of pop hits including “C’est La Vie”, “Rollercoaster”, “To You I Belong”, “Blame It On The Weatherman” plus More!

S CLUB 3 will have you dancing with fan Favourites “Don't Stop Movin”, “Reach', “S Club Party” & “Bring It All Back”

LIBERTY X joins the mammoth 90s line up featuring B*Witched, Atomic Kitten & S Club 3! Performing their smash hit "Just A Little" as well as fan favourite "Being Nobody", they are sure to be the perfect spark to ignite the evening!