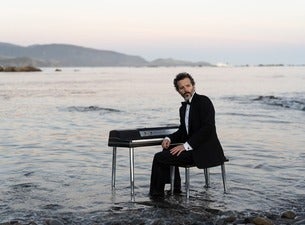 Bret McKenzie—whom you know from such modern musical treasures as comedy duo Flight of the Conchords, the Muppets movie reboots and other ace family friendly soundtracks, Lord of the Rings fan blogs, guest songs for The Simpsons, cycling around the streets of Wellington, and more— has a new solo record coming out filled with songs that ARE NOT COMEDY SONGS!

More on that later, because today not only signals new music is on the horizon, but we (we as in Aotearoa, New Zealand) are also being treated to a national bloody tour from Bret, his piano, his microphone and his 9-piece band.

In what promises to be a night that warms the cockles of your heart, Bret and band will be playing the length of Aotearoa this September in some of our most iconic and esteemed venues. Beginning in Nelson, the tour makes its way further south to Christchurch, Dunedin and Invercargill, before heading to Bret’s hometown playing the Wellington Opera House. The tour then climbs off the beaten track to take in Whanganui and Hastings’ Opera Houses before wrapping up in the bustling metropolis of Auckland.

It’s not a comedy tour, but you will smile, you might even laugh in places, that’s ok Bret’s a funny guy. The tour is in celebration of his new album ‘Songs Without Jokes’ out Fri 26 August. The clue is in the title really isn’t it.

Of the album Bret says:

“Post-Conchords, I’d been working on songs for the Muppets films, and during a session I had the thought that it would be fun someday to work on some songs that weren’t for someone else, that doesn’t have to tell a story or be funny or continue the narrative plot, checking all the boxes for the character in the movie,” McKenzie says. “I thought it’d be fun to do a record like that, something different. It started as kind of a side project; it’s not like I’m trying to start a massive solo career or change the world with music. But now it’s turned into a full record and therefore requires quite a bit of time. It turns out it’s quite a big job, putting out a record. Why did no one try to stop me?”

Written throughout 2019 between LA and Wellington, Bret was inspired by the path of the Harry Nilsson’s, the Randy Newman’s, and Steely Dan’s of the world. In fact, the album was recorded in LA with an ‘older generation’ of session musicians, including ‘Dean’ the real-life guitarist from Steely Dan.

While the album may be free of traditional punch lines, it doesn’t lack a sense of humour. It showcases a new stage of McKenzie’s career, to be sure, but one that isn’t so far removed from his past work and true artistic self.

“I’m becoming way more comfortable in my own skin with songs that are a bit more personal. At first, I felt a little naked singing a song about how I’m not sure what to do with my life— compared to writing for f*****g Kermit the Frog—but I’m getting more comfortable now with the heartfelt. Instead of going for a laugh you’re creating these cool little moments. I love comedy songs but I don’t put a comedy record on while hanging out; I don’t drive around listening to standup, I listen to regular music.

So it feels right to finally make a record of music I might want to listen to.” - Bret Mckenzie So there we have it folks. A musical tour from the one and only Bret McKenzie, complete with big band (who are all shit hot musicians in their own right). These shows will be special, trust the intrigue you’re feeling and get in quick.