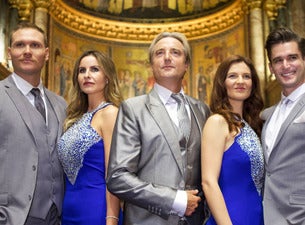 Formed in 2010 following on from the huge success of Amici Forever that sold over 3.5 million albums worldwide and had two No.1 albums, BRAVO AMICI is a sublime example of the much loved classical-crossover musical genre. Combining the essential elements of pop and opera, the mix of handsome tenors and stunning sopranos, all with a long list of international operatic and theatre credits to their names, have captivated audiences around the world entertaining an international who’s who including the Queen and royal family, Sir Elton John, Sir Richard Branson, Sir Cliff Richard, The Beckham’s, and Nelson Mandela. With the combined strength of these five amazing talents together with special guests, Carl Doy and The Black Quartet, New Zealand audiences are guaranteed an unforgettable concert experience.

"Before Il Divo and The Ten Tenors there was Amici Forever, and now its successor, BRAVO AMICI. They started the pop opera genre and are all still among its best practitioners. Featuring beautiful arrangements for three male and two female voices, BRAVO AMICI gives a fuller range of sound than any other vocal group in the genre. The audience was mesmerized by the magnificent singing."…..Mitch Gershenfeld, President & CEO of the McCallum Theatre, Palm Desert, California March 2019