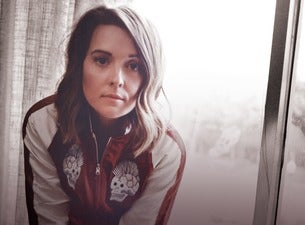 Alt-country sweetheart Brandi Carlile has crowned Billboard's Top Folk Albums chart twice since her 2005 debut, and it's easy to see why as she performs her heart-rending tunes in concert. Carlile is a world-class belter, and the perfect way her voice cracks when she goes big makes visceral tunes like "The Story" and "The Eye" all the more powerful. Country and folk are squarely in her wheelhouse, but she also dabbles in styles as diverse as rock, R&B, and blues, making for a dynamic concert experience anchored by her elegant songwriting and emotive voice. Whether she's performing songs from 2015's The Firewatcher's Daughter or making jaws drop with her soaring cover of Leonard Cohen's "Hallelujah", Carlile never fails to impress ticket buyers with her poise, gorgeous voice, and good-natured stage presence.

Brandi Carlile was born and raised in rural Washington state, where she began performing with her mother and brother at age eight. She taught herself to play guitar, and by her teens she was penning her own songs and singing backup for an Elvis impersonator. By her twenties she was performing in Seattle's music scene with her twin brothers, and in 2004 she signed with Columbia Records. Her self-titled 2005 debut topped Billboard's Folk Albums chart, introducing fans to her powerful voice and heart-on-sleeve songwriting. She teamed up with legendary producer T Bone Burnett for her 2007 sophomore album The Story, with stellar results -- the album peaked at No. 10 on the rock charts and scored a breakthrough hit with its title track. Since then Carlile has toured extensively and released four more acclaimed albums including 2011's Live at Benaroya Hall with the Seattle Symphony and 2015's The Firewatcher's Daughter.