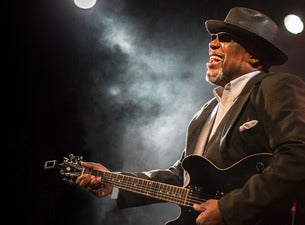 Take a Cadillac ride through the Southern States and you’ll hear a thousand flavours of music... “It’s a mixture of all the spices and good stuff,” says the award-winning US bluesman Big Daddy Wilson.

“As soon as you hear Big Daddy Wilson’s voice, whether speaking or singing, you hear his southern country roots. It’s a voice baptised in the river of African-American song, a voice with the power to heal.” Eric BIBB

A sentiment echoed by the thousands who have watched the Big Daddy Wilson Band perform on stages across the USA, Europe and the Southern Hemisphere over the last two decades.

Come and be healed by Big Daddy Wilson, joined by his full band from Europe.

“Big Daddy Wilson is the real deal, a true bluesman in every sense of the word. His voice is powerful and impressive.” Bluesforum