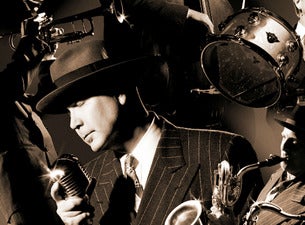 Fans in search of toe-tapping, brass-honking, high-energy swing revival need look no further than Big Bad Voodoo Daddy. The slick, stylish group have always been as tight as a drum on record, but their live performances are even more impressive, inciting furious dancing among veteran and novice swing dancers alike. Dressed to the nines in their trademark zoot suits and brandishing upbeat favorites like "Go Daddy-O" and "Mr. Pinstripe Suit," Big Bad Voodoo Daddy will take the stage with more energy than ever on their upcoming tour.

Big Bad Voodoo Daddy was formed in Southern California in 1989 by frontman Scotty Morris and drummer Kurt Sodergren. After self-releasing their eponymous debut album in 1994, the band got their big break when their songs "Go-Daddy-O," "Mr. Pinstripe Suit," and "You & Me & The Bottle Makes 3 Tonight (Baby)" were featured in the 1996 cult film classic Swingers. The popularity boost that followed landed them a deal with Capitol Records, resulting in a string of swinging albums that included Americana Deluxe (1998) and Save My Soul (2003). In addition to performing in the 1999 Super Bowl half-time show, the band has shared the stage with some of the world's leading symphony orchestras, including the LA Phil and the San Francisco Symphony. Big Bad Voodoo Daddy fans have plenty to look forward to as the boys hit the road for another electric round of shows.

"These guys are one of the slickest units touring today. They deliver to goods every night and watching the interaction on stage is really the cherry on top. Everything a professional touring band should be."

"...if you like big band music you will never see better players and/or performers! Truly amazing players and Scott the lead singer was spot on as always!"

"As good as the recordings are, they are even better live! The lead singer, Scotty, has a unique voice, great style, and a charming attitude. The band was masterful and tight."