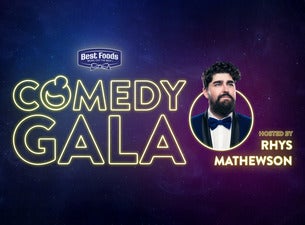 The Best Foods Comedy Gala is back this September at The Civic and the Michael Fowler Centre! Come and join us to celebrate Aotearoa’s biggest night of comedy.

Rhys Mathewson has won the Fred Award for the Best NZ show at Comedy Fest, taken out the Billy T Award, is a regular on 7 Days, and has just been announced for Dancing with the Stars! He made his first Comedy Fest appearance back in 2006 at age 15, as part of the New Zealand Comedy Trust's Class Comedians high school programme. Three years later he was crowned the youngest ever Billy T Award winner at just 19 years old, and has now racked up over 10 Comedy Fest shows. His high energy and sharp observations make him the perfect comedian to take the audience on an epic live comedy experience leading this incredible lineup.

Making it a night to remember will be Aotearoa’s self-proclaimed ‘humble’ king of comedy Tofiga Fepulea’i. Tofiga has graced screens and stages around the world with his unique brand of Pacific Island-style comedy, both as a solo act and as part of the legendary Laughing Samoans. The biggest-selling act at last year’s Comedy Fest, he brought down the house in massive rooms across NZ. Come watch him do it again at the Best Foods Comedy Galas this September.

Justine Smith smashed the hosting role last year, so we’ve got her back to slay the Gala stage. One of NZ’s queens of comedy, Justine has been named the Best Female Comedian three times! She’s a regular on 7 Days and The Project, and an all-round comedy legend. Her razor-sharp wit and biting commentary will have you in stitches.

If you’re not already a massive fan Chris Parker – where have you been hiding? From felting on Instagram to his hilarious all-to-real impressions online, Chris had us laughing through the lockdowns… and then he won Celebrity Treasure Island! Seriously, Chris has practically taken over screens large and small, and you now can see this Fred Award winner in the flesh this September. (Only Auckland Comedy Gala)

Hold onto your seats as we also welcome the hilarious Kura Forrester, along with the man of the moment Eli Matthewson and superstar of comedy, Pax Assadi to what will be a huge night of first-class entertainment.

We've got even more incredible talent to announce over the coming months, for what is shaping up to be one stellar night of live comedy. But why wait? Book your seats now before they’re all gone!

Proceeds from this event will support the New Zealand Comedy Trust, who run the (usually) annual NZ Intl. Comedy Festival, to continue their work supporting the development of the local comedy industry.

Book now to grab the best seats in the house, and treat yourself to one massive night of comedy with Aotearoa’s best and brightest!