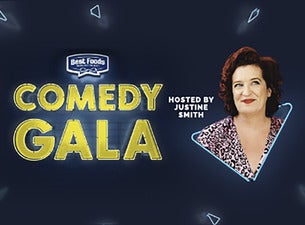 In both Wellington and Auckland, returning from a 5-year Festival hiatus, international comedy superstar Rhys Darby joins the line-up with his sensational blend of sound effects, characterisations and off-kilter observations. Plus, multi-award winning stand up and true talent of the comedy circuit Nick Rado, along with Billy T Award-winning comedian Guy Montgomery and the crack-up deadpan and self-deprecating Cori Gonzalez-Macuer.

For the Auckland lineup, comedy Royalty Urzila Carlson brings her world-famous lively, relatable and down-right hilarious style to the mix, and witness the magic of musical comedy with one of our funniest and most naturally talented young comics, Ruby Esther.

And in Wellington only - Aussie Laura Davis brings it all to the table with a combination of well-crafted jokes, dark, observational story-telling and provocative themes.

With your host Justine Smith, and the already-announced: Ben Hurley, Tofiga Fepulea'i, Chris Parker and Angella Dravid, this will be the biggest night of laughs this year!

Get those tickets now!