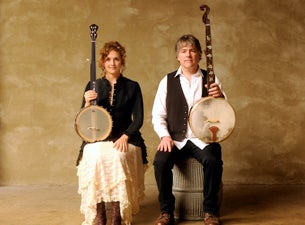 On their own, both Bela Fleck and Abigail Washburn have taken the banjo far beyond where it's ever been before. But when this husband-and-wife team play together, they blow all expectations completely out of the box as far as the possibilities of the instrument. They started performing as a duo as a way of keeping it in the family after their son was born, and to avoid being separated by touring in support of solo careers. Like the albums they've made together, including their Grammy-winning, self-titled 2014 debut and the 2017 follow-up, ‘Echo in the Valley,' Fleck and Washburn's performances are entirely self-contained affairs that depend exclusively on the pair's own peerless instrumental abilities and Washburn's lovely, folk-inflected vocals. But whether they're delivering innovatively reimagined takes on traditional tunes or their own genre-bending compositions, Fleck and Washburn create a big, wide musical world together that's much more than the sum of its parts... not that those individual parts were any too shabby.

Bela Fleck and Abigail Washburn followed different paths before they finally came together, establishing themselves as trailblazing artists in their own right long before their personal and musical union. Fleck was born and bred in New York City, and he soaked up diverse influences including bluegrass, folk, and classical music. After relocating to Boston, he began exploring his revolutionary ideas about the banjo, and he released his first solo album in 1979, wowing bluegrass and folk audiences with his envelope-pushing approach. In 1988 he began working with his band The Flecktones, expanding his approach to encompass jazz, rock, funk, and electronics. Over the course of his startlingly eclectic career, he's earned 15 Grammys in an unprecedented number of categories. Washburn grew up in Washington, D.C., and Minnesota, and played with all-female Americana group Uncle Earl. She began her solo career with 2005's 'Song of the Traveling Daughter' and quickly dominated the bluegrass album charts with her progressive style. Fleck and Washburn were married in 2009, and after the birth of their son Juno, they decided a duo career was the best way to keep the clan together. Their first record together earned them a 2016 Grammy award for Best Folk Album, and they followed it up with 'Echo in the Valley' in 2017, sparking another successful round of two-banjo touring.