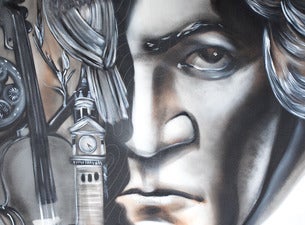 Right from the very first note of his very first symphony, Beethoven does something new. No symphony had ever started on such an unexpected chord. Yet here’s the paradox: these first two symphonies fit quite happily within the classical mould Haydn and Mozart had created. Haydn, in particular, would have appreciated their quicksilver wit.

With the colossal Third though, the mould is shattered and cast aside. A symphony on such a gigantic scale was totally unprecedented. This is where Beethoven truly begins to reshape music.

After the Eroica, Beethoven returned to his Classical roots. Lithe and sophisticated, the ebullient Fourth Symphony is the ultimate Haydn tribute, and is Beethoven at his most outgoing and confident.

Then a complete change of mood. The extraordinarily original Fifth Symphony is a work of staggering power. It is unremittingly terse and intense; it begins in darkness and ends in blazing jubilation; it is one of the most famous pieces of music ever written, and with good reason. It doesn’t matter how well you know Beethoven 5. A performance is always an event.

It’s said that when Beethoven became deaf, the music he missed above all was birdsong. The Pastoral Symphony is a tender, affectionate picture of the countryside he loved so much, from a babbling brook to a violent thunderstorm. But it’s not merely pictorial. In this very personal music, Beethoven pours out his joy at being in nature.

Joy in the Seventh Symphony is all about rhythm. ‘The apotheosis of the dance’, Wagner said, and he was right. This irresistible music skips and springs and leaps with vigour, yet also with miraculous lightness and grace.

Beethoven’s whimsical, amiable Eighth Symphony is the work of a great artist who also happens to be a fellow human, laughing and joking like the rest of us.

Our shared symphonic journey ends with a mighty hymn to our universal humanity, the heaven-storming Ninth. The orchestra alone wasn’t enough for Beethoven’s ecstatic vision: voices were necessary. ‘All men shall become brothers,’ they sing. ‘I embrace you, O you millions – this kiss is for all the world!’ With this music, with its vast, elemental force, Beethoven speaks to us across the centuries and into infinity.