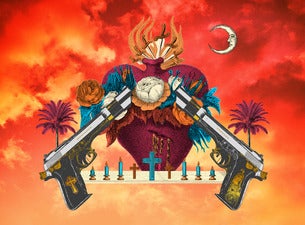 The Soundtrack from Baz Luhrmann's

If you lived within earshot of the pop culture zeitgeist in 1996, you remember the greatest love story of all time grabbing hold of the radio airwaves and squeezing like a sweet teen crush.

From Radiohead to Everclear, Cardigan's Love Fool to Garbage's #1 Crush; from the mirror ball ecstasy of Young Hearts Run Free to the aching gravitas of When Doves Cry, get ready to relive the soundtrack of a generation (Volumes 1 & 2) with a cast of star performers radiating a combined chemistry as potent as the young Claire Danes and Leonardo DiCaprio.

Don’t forget to dress for hedonistic success: masks, wings, chain mail, or anything else that takes you back to a Capulet house party circa '96.

Book now or die of heartbreak!