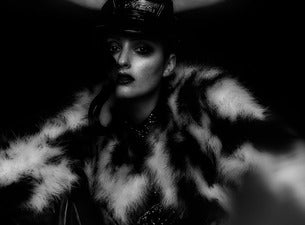 R&B newcomer Banks is generating major buzz in 2014, turning heads with her dark beats and synth-heavy music. Drawing influence from artists like Fiona Apple and Lauryn Hill, Banks’ songs possess a mysterious beauty, and when paired with her frail, sultry vocals, the result is stunning. During her live shows, she mesmerizes with hits like "Waiting Game" and "This Is What It Feels Like," seducing fans with her commanding stage presence and alluring voice. Banks will grace the stage once again on an upcoming world tour, delighting fans with her critically acclaimed tracks.

Los Angeles-based Jillian Banks began writing music at the age of 15, teaching herself piano to better cope with her parents' divorce. The sexy songstress released her first EP London in 2013 — a breakout year for the newcomer — landing an opening spot on tour with The Weeknd. Billboard Magazine named Banks a "magnetic writer with songs to obsess over," and she's attracted attention from some of pop's biggest stars, including Ellie Goulding. Hot on the heels of her 2014 Coachella appearance, Banks returns to the stage to share material from her debut Goddess on a string of highly anticipated worldwide tour dates.