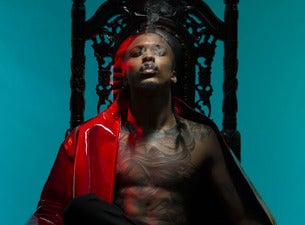 New Orleans R&B singer/songwriter August Alsina's debut single "I Luv This Sh*t" was all over the radio in late 2013, reaching the top of Billboard's Mainstream R&B/Hip-Hop Airplay chart after a 21-week climb.  Alsina may be new to the game, but he's already attracting high-level attention – R&B superstar R. Kelly tapped Alsina to open for him on some of his 2013 live tour dates, so the young star has already found himself playing concerts to arena-sized crowds. As a headliner, Alsina established himself as a formidable performer at  raucous club dates and radio station showcases in 2013, impressing ticket buyers with a confidence that belied his relatively recent arrival. The hip-hop crooner's career has been on the fast track since he released his first mixtape The Product in April of 2012. A second mixtape, dubbed The Product 2 was released a year later, followed soon after by his first Def Jam Records EP Downtown: Life Under the Gun. In a report on one of Alsina's 2013 shows, The New York Daily News wrote that he "had ladies in the front row clawing at him as he rocked the stage."