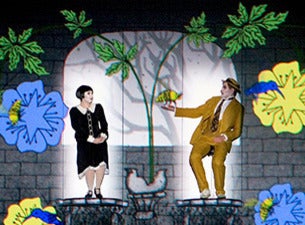 About The Magic Flute

Gloriously inventive animation and live action meet the stunning music of Mozart in this fantastically fun interpretation of the enchanted world of The Magic Flute.

Blending projected animation with stunning live performance in an ingenious kaleidoscope of 1920s silent movies and Tim Burton-esque dark humour, this visual fantasia is made for film buffs and art lovers, as well as fans of opera.

Billows of smoke morph into images, giant spiders roam the forest, elephants splash in cocktail glasses – this wildly inventive The Magic Flute is like no other.

With its captivating and innovative staging where film animation interacts with live singers, this production has thrilled audiences around the world. Now New Zealanders have the chance to see this most popular of operas, featuring a large international cast and crew with a 75-strong Berlin chorus and soloists travelling to Aotearoa and accompanied by the Auckland Philharmonia Orchestra, exclusively at Auckland Arts Festival 2019.

Performed in German with English surtitles

Supported by the University of Auckland, New Zealand Opera, and Goethe Institut. Presented by arrangement with Arts Projects Australia.