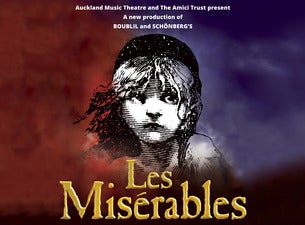 With glorious new staging and dazzlingly reimagined scenery, this breathtaking production of Les Misérables will open at The Civic, in November 2019 in celebration of the 100th anniversary of Auckland Music Theatre.

Set against the backdrop of 19th-century France, Les Misérables tells an enthralling story of broken dreams and unrequited love, passion, sacrifice and redemption – a timeless testament to the survival of the human spirit.

Featuring one of the greatest scores of all time, with thrilling and beloved songs including I Dreamed A Dream, On My Own, On Day More and Do You Hear The People Sing this epic and uplifting story has become one of the most celebrated musicals in theatrical history.