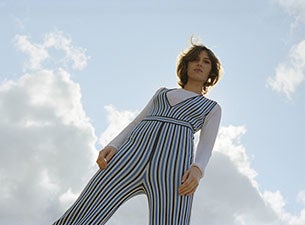 AUCKLAND, NZ (Nov 6, 2019) – Celebrated New Zealand singer-songwriter and force of nature ALDOUS HARDING returns home for a unique and special handful of NZ shows this March. Joined by two of the most compelling artists of the indie world today, WEYES BLOOD and PURPLE PILGRIMS, this is a triple billing not to be missed.

Tickets for Auckland and Christchurch shows go on sale at 11am, Monday November 11.

My Live Nation members may also secure tickets first during the pre-sale beginning 11am, Friday November 8.

For tour and ticket information for Wellington’s show as part of NZ Festival of the Arts, visit festival.co.nz.

An artist of rare calibre, Harding has become well-known for her expressive tales, carried by delicately rendered musical arrangements that mystify audiences; trapping them in her web. Her critically acclaimed album Designer was released in April on Flying Nun Records (NZ). With its arrival came a mighty ripple, felt throughout the world of popular culture.

Q Magazine graced the album with ★★★★★, deeming the album as “both fascinating and frightening, highly eccentric and blisteringly beautiful” while The Guardian agreed, calling it a “captivating and indecipherable” work. For Designer, Harding has been nominated for four NZ Music Awards including Best Solo Artist, Best Alternative Artist, Song of the Year and Album of the Year.

Pitchfork marked the album Best New Music on release, while NPR praised Mering’s songwriting as “steeped in the magic stuff of fantasies and daydreams.” This will be Mering’s maiden trip to New Zealand, so do not miss the opportunity to see one of the most talked about artists in the indie music world today.

Enchanting sister duo Purple Pilgrims (Clementine and Valentine Nixon) and Flying Nun labelmates will bring their mesmerizing dreamscapes of celestial pop, folk and atmospheric jazz to what is a truly special lineup and celebration in the name of ‘songwriting’. Perfumed Earth, their sophomore album and Flying Nun debut, shimmers with veiled, kaleidoscopic textures, arriving at a sound that is both spacious and sensual, swooning and spellbound.

In August of this year, Harding’s Designer album tour produced 3 sold-out shows, which included a packed out audience at Auckland’s Powerstation. Don’t miss out on this supremely special opportunity to see Aldous Harding, Weyes Blood and Purple Pilgrims together in concert, for a rare celebration of songwriting power.

TICKETS ON SALE 11AM MONDAY NOVEMBER 11
AAF Members pre-sale: 11am Friday November 8 until 10am Monday November 11

Below is what press experienced at Harding’s Designer New Zealand Tour.

“Bowing out for the night, it was clear Aldous Harding had just cast a very long spell. And the audience was happy to be bewitched.” New Zealand Herald

“Her voice slices through the crowd and makes a beeline for the core of each of us. She taps into your soul, where you thought there was only space for your own thoughts and feelings.” Cityscape