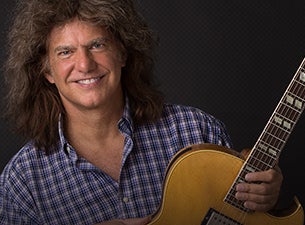 About AAF: An Evening with Pat Metheny

Playing New Zealand for only the second time in his 40-year-plus career (having previously visited in 2006), Metheny will present a range of music from throughout his career, joined by his long-time drummer, Antonio Sanchez, Malaysian/Australian bassist Linda May Han Oh and British pianist Gwilym Simcock.

Of the forthcoming shows, Metheny says:

“It could really be anything and everything. I have already written a bunch of new music which we recorded and will be released early 2020, inspired just by the thought of this presentation, but I could also imagine playing only old music one night. I like the idea of keeping it open and letting it become whatever it winds up being over the course of a tour.

“At this stage, I have so much music and it all is kind of one big thing for me without borders or distinctions between this period or that period. With Antonio, Linda and Gwilym, I think we could and will do a wide range of things from throughout all of it - and maybe uncover what the next period has in store as well.”

Pat Metheny first burst onto the international jazz scene in 1974 displaying his soon-to-become trademarked playing style, which blended the loose and flexible articulation customarily reserved for horn players with an advanced rhythmic and harmonic sensibility - a way of playing and improvising that was modern in conception but grounded deeply in the jazz tradition of melody, swing and the blues. With the release of his first album, Bright Size Life (1975), he reinvented the traditional "jazz guitar" sound for a new generation of players.

Inducted into the Downbeat Hall of Fame in 2015 as its youngest-ever member and only the fourth guitarist (joining Django Reinhardt, Charlie Christian and Wes Montgomery), Metheny has throughout his career continued to redefine the genre by utilizing new technology and constantly working to evolve the improvisational and sonic potential of his instrument.

Metheny has spent much of his life on tour, often doing more than 100 shows a year since becoming a bandleader in the 70s. He continues to be one of the brightest stars of the music scenes today.

Joining Pat Metheny will be his long-time drummer Antonio Sanchez who has been his most consistent associate in a huge variety of settings since 2000. “Antonio is always incredible. He is one of the greatest drummers of all time and the fact that we have been able to share so much music together over these years is something really special for both of us. And I am so proud of all his recent successes with the “Birdman” score.” Antonio’s score for the Oscar winning Alejandro G. Innaritu film was nominated for a Golden Globe and 2016 Grammy Award as well as dozens of other prizes around the world. Metheny goes on to say “Being on the bandstand with Antonio is like nothing else I have ever experienced with any other musician. He has the capacity to listen and be inside the music with an intensity that is unique. That focus, combined with his truly otherworldly skills on the kit puts him his own category.”

Malaysian/Australian bassist Linda May Han Oh has been extremely active on the New York scene for the past few years, playing with many of the major musicians in the community. Metheny continues, “I love to follow who the new players around town are and I go out often to check out what everyone is doing. The first time I heard Linda, she immediately went to the top of my list of candidates. She has everything I always am looking for; great time, great notes and a lot of imagination. But the most important thing I am always searching for in any musician is an elusive and hard to describe quality that embodies a certain communicative ability to connect - not just to the other musicians, but to the audience as well. Linda has that. When we got together, she was so easy to play with. She went on to tell me how much she had been affected as a young player by my record Question and Answer and a few others, which is incredibly gratifying for me. I am really excited to get the chance to play with Linda.”

Rounding out the ensemble is British pianist Gwilym Simcock, one of the most exciting new pianists to emerge from the UK in many years. Metheny: “I first heard about Gwilym on a trip to London a few years back when someone at a radio station gave me his debut record while mentioning to me that he had often spoken of his interest in this music having been sparked by his exposure to one of my early records, again one of the most flattering things imaginable. When I listened to his CD, I became an instant fan; Gwilym is simply one of the best piano players I have heard in a long, long time. After trying to find time to get together over a number of years, in 2014 I was finally able to stay over after a gig in London to do some playing. We had planned on getting together for a few hours or so but wound up playing continuously for an entire afternoon. It was absolutely incredible what we were able to get to so quickly. I have only ever had that kind of communication and ease of playing with another musician a handful of times over the years to that degree. I am so excited to get the chance to play with Gwilym and there seems to be enormous potential there for us to develop a really unique way of playing together.”