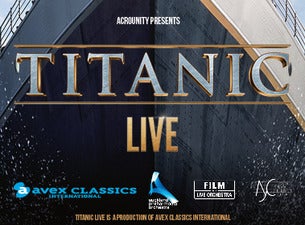 Featuring a uniquely familiar soundtrack that will forever be a part of cinematic history, Titanic Live sees James Horner’s epic score take centre-stage with a 72-piece orchestra, choir and Celtic band, while the film is projected onto the screen behind.

Titanic Live enables fans to celebrate the 20th anniversary of Titanic and relive their favourite moments of the film while experiencing it in a way they’ve never seen before.

“This experience is beyond anything I’ve seen in the theatre. When hearing the music out front and dominating, you really realise how the music drives the emotion of the movie. I felt these big surges of powerful emotion whether it was the elation of the love story or the dread, the fear. A beautiful experience.”

Titanic Live is a production of Avex Classics International.