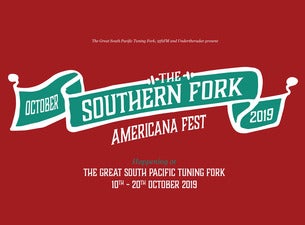 The Tuning Fork, 95bFM and Undertheradar are proud to announce the return of the Southern Fork Americana Fest, back for its sixth year in Auckland! Enjoy a star-studded lineup to celebrate the roots of Americana, Country and Blues music. The festival will cover six nights at Spark Arena's budding companion venue, The Great South Pacific Tuning Fork.

For the last few years, full festival passes have flown out the door so don't hesitate to swipe one of these up!

Ian and James Felice grew up in the Hudson valley of upstate NY. Self-taught musicians, inspired as much by Hart Crane and Whitman as by Guthrie and Chuck Berry, they began in 2006 by playing subway platforms and sidewalks in NYC and have gone on to release nine albums of original songs and to tour extensively throughout the world. The Felice Brothers' latest release, Undress, was recorded straight to tape with very little overdubbing. It's their most personal and reflective album to date.

Ever since his first record, 2006’s self-released Marmalade, LaFarge has been a difficult specimen to pin down, indeed. Though he was raised on a healthy diet of blues, bluegrass, ragtime, Western swing and old-time country — and though he has consistently demonstrated a decided affinity for pre-1950s menswear — the Illinois native is by no means a throwback or a museum piece. Timelessness, and refined good taste, is LaFarge’s raison d’être, and his influences are as multi-hued and wide-ranging as the rhythms that buoy his starkly poetic songs — rhythms that are steeped in the very essence of jazz.

Multi award-winning Canadian-born, New Zealand singer-songwriter Tami Neilson needs no introduction. Having become one of NZ's most beloved artists of the modern era, blending country, soul and rockabilly into her signature high-octane performances, Neilson's songs have tugged at our heart-strings and soothed our souls. Accompanied by Tami's brother and longtime co-writer/collaborator Jay Neilson, the Big Boss Mama will bring her extensive songbook to the Tuning Fork this October in the middle of her nationwide tour.

Jonny Fritz and Joshua Hedley epitomise all that is good and wonderful in heartfelt contemporary, and a little bit looney, country music. With complete love and understanding of music of the forefathers, the duo presents a celebratory show that respects the past but gives it a contemporary edge. Honky-tonk, bluegrass, outlaw country and traditional country are seamlessly intertwined in a performance that celebrates the golden days of the '50s and '60s but with a modern day knowledge and feel. The Jonny Fritz and Joshua Hedley Show brings together two of the finest singers and players in a fresh music partnership that's made in country music heaven.

Award-winning guitarist with a gift for insightful songwriting, Molly Tuttle evolves her signature sound with boundary-breaking songs on her compelling debut album, When You're Ready. Tuttle has garnered the respect of her peers, winning fans for her incredible flat-picking guitar technique and confessional songwriting. In the past year, Molly has won the Folk Alliance International's honour for Song of the Year for 'You Didn't Call My Name' and took home her second trophy for the International Bluegrass Music Association's Guitar Player of the Year (the first woman in the history of the IBMA to win that honour).

Dee White makes classic-minded country music for the modern world. Raised in small-town Alabama, he's a raw, natural songwriter, spinning the sounds and stories of the American South into songs that nod to the past while still chasing down new horizons. His songs are classics-in-the-making, inspired by traditional sounds but happily rooted in the 21st century. This isn't a throwback act. Instead, it's a contemporary, ageless take on country music — one that packs just as strong a punch today as it would've 50 years ago.

The NZ-based trio, Albi & the Wolves, create a huge sound using only an acoustic guitar, an electric violin, double bass and their three vocals. The band is renowned for their great stage presence and dynamic shows that they have evolved by touring their home country extensively including shows in Australia. Albi & the Wolves recently won the Best Folk Artist 2018 TUI at the New Zealand Music Awards for their debut album One Eye Open. Chris Dent (the proud albino front man Albi), Pascal Roggen and Michael Young's individuality shines through the music to make something compelling, uplifting, soulful and fun.