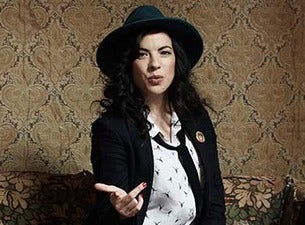 The songs of Nick Cave & The Bad Seeds in a whole new voice.

A favourite of Yoko Ono, Jools Holland and Auckland concertgoers, Camille O'Sullivan has seduced audiences around the world with her sultry, spellbinding performances of statement-making music by Radiohead, Tom Waits, Leonard Cohen, David Bowie and more. This luminous new show is devoted entirely to Nick Cave & The Bad Seeds – both the iconic songs and the band’s intense, macabre sense of rock poetry – as reinvented by O’Sullivan.

Capturing the essence of an artist of many guises – at once violent, beautiful, logical, crazy, devout, troubled and religious – Cave is a passionate, unique interpretation of brilliant music. Famous for her rendition of ‘The Ship Song’, there’s no better performer to take us on the journey than Camille. A scintillating concert fit for the epic Civic stage.

“When [Camille] sings it’s as though her breath is soaked in paraffin; one spark, and the whole room would ignite.” — Daily Telegraph

“[The] singer people can’t stop talking about.” — The Independent

Sponsored by NZ Herald and NewstalkZB
Produced by Wales Millennium Centre as part of Festival of Voice 2018.