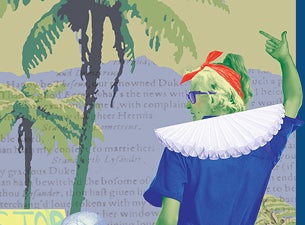 TRICK OF THE LIGHT THEATRE

THE PARKIN SEASON OF

Jumping from Athens to Aotearoa, with a cast of New Zealand’s finest comic talent, Lysander’s Aunty is a wild ride of magic, mayhem and mutiny. In Shakespeare's A Midsummer Night's Dream, young lovers Lysander and Hermia defy the Duke by eloping to an aunt’s house in the woods. But who is this law-snubbing, free-loving aunty? What’s she doing in the bush? And what happens when the law comes knocking at her door? From the makers of The Bookbinder, and in the tradition of Rosencrantz and Guildenstern Are Dead, comes a riotous reworking of Shakespeare’s most popular play that takes a cannon to the canon.

Lysander's Aunty was originally commissioned by The Court Theatre, Christchurch and developed with the support of the Aotearoa New Zealand Festival of the Arts, Auckland Theatre Company and Auckland Arts Festival. By arrangement with Playmarket.