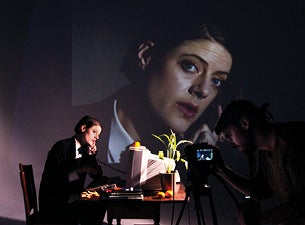 ADAPTED FROM THE BOOK BY CHRIS KRAUS

by Eleanor Bishop and Karin McCracken

Everybody fails, sometimes spectacularly. Few write a fearless book about it. Brimming with intellect, humour and rich visuals, this smart new theatre adaptation of acclaimed writer Chris Kraus’ book will have its World Premiere at the Festival. Kraus, who spent part of her adolescence in Wellington until returning to New York at age 21, is best-known for the cult hit I Love Dick. Her book Aliens & Anorexia depicts her attempt to make the feature film Gravity and Grace in New Zealand in the ‘90s. Weaving in the writings of French philosopher Simone Weil alongside a free-wheeling retrospective of other “failed” artists, Kraus traverses Berlin, Andy Warhol’s New York, Marseilles and New Zealand in a bid to understand what it means to not succeed. This theatre piece integrates contemporary video and sound design alongside stand-out performances to create a daring and engrossing production. See it here first. The development of Aliens & Anorexia was supported by Aotearoa New Zealand Festival of the Arts.