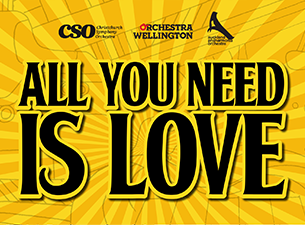 All You Need Is Love Tickets

Ben McDonald for Stars of the Stage Ltd present

All You Need Is Love

New Zealand’s love affair with The Beatles has lasted over six decades. From screaming teens in the 60s to six figure album sales in the 2000s. Beatles songs have been a soundtrack to a generation; an anthem to youth and beyond. Beatlemania has never left our shores!

This year, as one of the very few countries in the world where live entertainment can happen, it seems only right to pay homage to the world’s most successful band with a city tour titled, All You Need Is Love!

Combining the extraordinary talents of the Orchestra Wellington in the capital and the Auckland Philharmonia Orchestra in Auckland, with the amazing voices of Annie Crummer and Laughton Kora, plus a stonking rhythm section, this concert series is one not to be missed.

This magical mystery tour of The Beatles’ reign over international pop charts begins with their early hits and progresses through to their more psychedelic era, with Sgt Pepper and the White Album.

So come together this Christmas, secure your ticket to ride and show the world that all you need is love!

Grab your ticket to ride today!

Beatlemania hit New Zealand on 21 June, 1964 when 7000 hysterical fans greeted the Fab Four in Wellington during their ‘Far East’ tour. After concerts in the United States, Europe, Hong Kong and Australia, the lads from Liverpool touched down in New Zealand.

The Beatles’ fame preceded them and Kiwi teenagers were ready for action. In Wellington, police struggled to keep crowds behind a wire fence at the airport and rapturous fans besieged the Beatles’ hotel.

On 22 June the Beatles played their first New Zealand concerts, repeating a 30-minute 11-song set as fans screamed and punctured the seats of the Wellington Town Hall with their stiletto heels. Audiences in Auckland and Dunedin followed suit.

Fast forward to 36 year to 2000 when the best of The Beatles compilation album was released in New Zealand and became one of the biggest selling albums in New Zealand history. Another 21 years down the track and The Beatles songs are now being enjoyed by a new young audience, with 65 per cent of the Beatles' listeners on Spotify under the age of 34.

Beatles songs were streamed an astonishing 50 million times in the first 48 hours after they became available to listen to live on the internet for the first time. According to records, The Beatles still have the most No.1 singles on the NZ Music Chart with 14 as a band, followed by Justin Bieber with 10 and Katy Perry with 9 No.1 singles respectively.

This is your big chance to get on board this magical mystery tour!