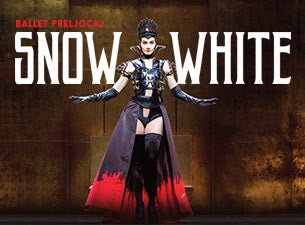 Announced today as a headline act for the 2020 Festival, this visually ravishing full-length ballet by renowned French choreographer Angelin Preljocaj has toured the world with sold-out seasons in Los Angeles, London, Sydney, Melbourne and Brisbane.

Snow White is choreographed to magnificent music from Gustav Mahler symphonies, and features a cast of 24 dancers with costumes by visionary fashion designer Jean Paul Gaultier.

In creating this production, Preljocaj and Gaultier remain faithful to the original Grimm brothers’ fairy tale of 1812 – the innocence of Snow White with ‘skin as white as snow, lips as red as blood, and hair as black as ebony’ against the envy, deceit and obsession of her stepmother Queen – a story that has since inspired countless pop-culture interpretations for film, television, music, and dance.

Auckland Arts Festival Artistic Director Jonathan Bielski says, “We’re thrilled to welcome back Angelin Preljocaj and his company whose Les 4 Saisons… delighted audiences in 2007. Ballet Preljocaj’s Snow White is a truly global ballet hit and has been a sold out sensation wherever it tours. I saw the show last year at Sydney Opera House and knew that we had to bring this daring and breathtaking production to New Zealand audiences.”

From a wonderful pas-de-deux with a sleeping Snow White, potholing miners (representing the original seven dwarves) who perform incredible vertical acrobatic feats, and the wicked stepmother as the central character, the erotically charged choreography brings to life the dark world of the Grimms.

“The wicked stepmother is the one I examine through her narcissistic determination not to give up on seduction and her role as a woman, even if it means sacrificing her stepdaughter’,” says Angelin Preljocaj.

Born in Paris of Albanian parentage, Angelin Preljocaj studied classical ballet before turning to contemporary dance and founding his own company in 1985. He has created 52 choreographic works and has been commissioned to work with some of the world’s leading artists at La Scala, The New York City Ballet and Paris Opera Ballet.