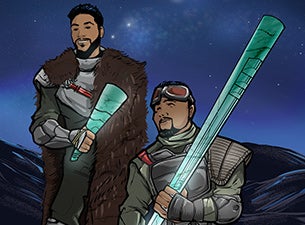 AAF: Che Fu & The Kratez: Return of the Navigator Tickets

About AAF: Che Fu & The Kratez: Return of the Navigator

When Che Fu dropped Navigator, his second album in 2001, he brought forth tracks that have become kiwi classics, crossing genres and bringing hip hop to the masses.

Mixing Polynesian sounds with reggae, soul and hip hop, singles ‘Misty Frequencies’ and ‘Fade Away’ are still some of the most played tracks on local radio. Navigator is a bonafide classic, and we celebrate its 20-year anniversary with Che and his band, the Kratez, for this Auckland Arts Festival exclusive.

Opening are Che’s top picks, Team Dynamite and Rubi Du, with DJ Manuel Bundy on the decks throughout the night.

Don’t miss this once-in-a-lifetime concert honouring one of “New Zealand’s most eloquently soulful vocalists” and his landmark Navigator, which Nick Bollinger calls “not just a beautiful album, but an important one.”