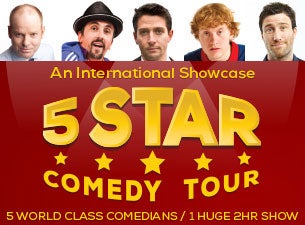 Over the last 10 years the '5 Star Comedy Preview' has become one of the most eagerly awaited highlights kicking off the annual NZ International Comedy Festival in Auckland.

In 2013 producer, comedy.co.nz productions, is taking the 5 Star Comedy On Tour for the first time to Tauranga, Hamilton, New Plymouth, Wellington and back to the Bruce Mason Centre in Takapuna.

The show features 5 world class comedians in one big 2 hour show providing comedy fans across the North Island with an even bigger International Comedy Festival experience.

For the guest comedians it is an opportunity to also experience more of New Zealand often providing some fresh perspectives and material for their own live shows.