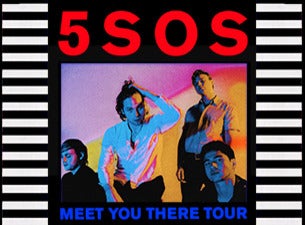 About 5 Seconds of Summer

ANNOUNCE MEET YOU THERE TOUR DATE FOR AUCKLAND

Australia’s own 5SOS (5 SECONDS OF SUMMER), one of the world’s biggest pop/rock bands, is thrilled to announce they will bring their Meet You There tour to Auckland this August. After selling out their 5SOS3 tour in less than 5 minutes, this all ages live date will follow the release of their third album “Youngblood” on June 22 and will give fans the opportunity to hear new tracks ‘Want You Back’ and current No. 1 smash ‘Youngblood’, alongside old favourites like ‘She Looks So Perfect’, ‘Amnesia’ and more!

Fans are being given the chance to enter an exciting ticket pre-sale by pre-ordering the “Youngblood” album.  A unique code will be required to access the presale. Fans can pre-order the album and gain access to the pre-sale here.

Over the last six years 5SOS has played to millions of fans in arenas all over the globe and appeared on “The Tonight Show Starring Jimmy Fallon”, US “Today Show”, ‘’The Voice’’, “The Ellen Show” and more.  Now, with new single ‘Youngblood’ tearing up the New Zealand charts – No. 1 on Shazam, Top 5 on iTunes, No. X on Apple Music, No. 6 on Spotify, and a GLOBAL top 30 record - anticipation for this national tour is at an all-time high.

With forthcoming album Youngblood, 5SOS expands its musical parameters while retaining the hooks and trademark DNA that’s always been a massive part of the band’s appeal. Vocalist/guitarist Luke Hemmings explains, “Growing up is what we had to do on “Youngblood”. Seven years as a band may seem like a long time, but we were teenagers when we started. We had to look at each other and say, ‘Are we going to stop now, or do this forever? Because if we continue, then we have to go farther than we ever have before.’”

‘Want You Back,’ the first single from “Youngblood”, debuted at No. 1 on iTunes in over 18 countries and has amassed more than 93 million streams worldwide.

Hailed as the “biggest new rock act in the world” by Rolling Stone, 5SOS is the only band (not vocal group) in history to see its first two full-length studio albums enter the Billboard 200 at No. 1.  5SOS’s self-titled debut album has sold more than three million units worldwide, with 1.5 million albums and more than 4.5 million single tracks sold in the U.S. alone.  2015’s “Sounds Good Feels Good” charted at No. 1 in 12 countries, including Australia, the U.S. and the U.K. ‘She’s Kinda Hot,’ the album’s first single, topped the iTunes charts in 44 countries.